I have made a few recipes from Miyoko Schinner’s Artisan Vegan Cheese by now, with varying degrees of success, and I can honestly say there’s no other vegan cheese book that can hold a candle to it. The Cheesy Vegan has a really nice though somewhat runny silken-tofu-based cream cheese that was gorgeous on bagels with chives, but the cheese I used as pizza topping and the blue cheese were both pretty much revolting. The Ultimate Uncheese Cookbook was one of the first vegan cookbooks I ever tried, it was one of the three available in the library, and it put me off veganism for 3 years, until I decided that animal welfare meant more to me then the taste of cheese. 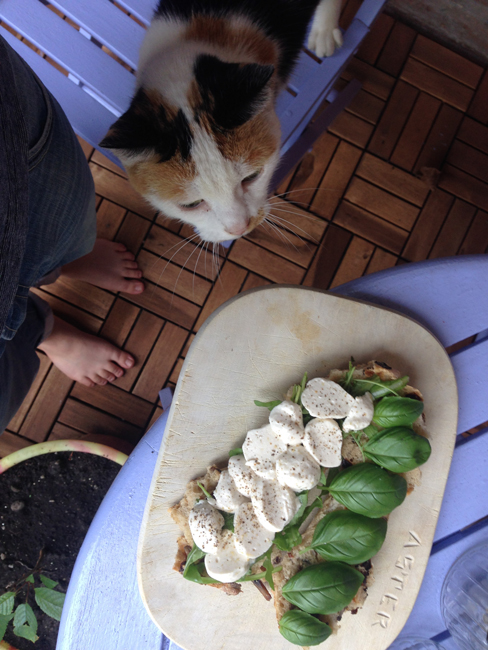 One should probably not triple Miyoko Schinner’s recipe for mozzarella, especially not if it is used to make mini-mozarella, resulting in so many tiny mozarella-balls half of one’s fridge is filled with them. Also, making them in those quantities means that it is hard to sufficiently heat the mixture, which results in a more spreadable, less melty mozzarella than something that would be ideal for putting on sticks. If you heat it properly it will become scarily similar in texture to dairy mozzarella (and the taste is indistinguishable regardless). The badly-heated one does make for a spreadable sandwich filling that is absolutely delicious though, and it actually reminded me of fresh goat’s cheese. So “Elk nadeel heb z’n voordeel” (“Every con has its pro”) as our famous Dutch soccer coach Johan Cruijff would say. The cat, as you can see, agreed.

I am still getting the hang on most of the cheese-recipes, culturing things is a tricky business, and I am much better at kefir and kombucha than I am at rejuvelac, yoghurt or cheese. The mozzarella and brie are a happy exception, but most of it is tricky and many is the time that I’ve found moldy cheese, or forgotten about perfectly fine cheese and then have it turn angry and sour on me. One of the things I did manage to tackle in the end though, were rolls of chèvre. I desperately wanted to put those on top of a pizza with Daiya mozzarella, because it is the closest one could even come to my favourite pizza from pre-vegan days. This one, dare I say it, is better, if only because the sauce and dough on my version is actually handmade, proper, garlicky delicious, and not something dropped by a machine on something that’s more cardboard that pizza-crust. Both my own coconut-milk-based cheesy spread and the cashew cheese on top of that are better than the original. 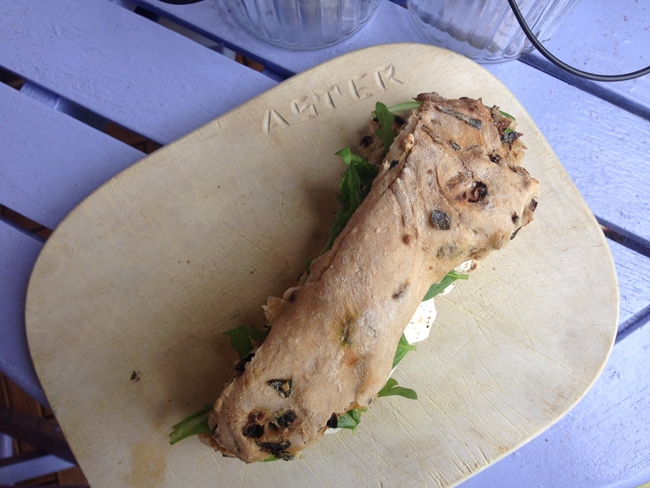 I don’t want to be too negative about other vegan “cheese” books, they might work for you, but both with the Cheezy Vegan and the Uncheese Cookbook, I pretty soon decided that I’d rather not eat any cheese than the things they claim will substitute cheese, maybe with the exception of a tweaked version of tofu feta. And it’s unnecessary to eat bad cheese as a vegan, because there’s lots of creamy sauces and cashew fondue and baked marinated tofu to be had that is not cheese per se, but that is tangy and delicious in its own right. If you are on the fence about Artisan Vegan Cheese, buy the VegNews Cheese Issue and see how it goes. It went amazing for me! Then you can decide if it’s worth buying. The difference between that book and the others is of course the fermentation, because however much nutritional yeast, miso, salt, garlic, lemon juice or vinegar, it just won’t be fermented like cheese, and Miyoko Schinner’s recipes actually are fermented like cheese! And especially with the lighter cheeses, like mozzarella and brie, that culturing adds precisely the right tang. I am currently air-drying a parmesan, so I’ll let you know how that went.