This story comes to you in 3 parts (and I suspect it will get better with each one). All are birthday related. They have been edited in a little bit of time where it seemed the computer would not give out. Anyway, 3 parts: Breakfast, Cake and Edible Dinosaur Landscape.

Part 2: Cake.
I not just bungled my sister’s birthday. I also baked her an enormous cake. One for her, one for me. Hers was without nuts, because we differ of opinion on the topic. I think they add much needed texture, she thinks they ruin whatever they are in. We regularly catch her sneaking raisins out of the muesli, because raisins are great but nuts and oats are crunchy bits of uselessness. So I made her a cake especially. And then she was sick and threw up. Which is sad on any birthday, but especially if your main gifts is a large elaborate Comfort-Food inspired Swartzwalder Kirsch. She did eat a frightening amount two days later when she had recovered. 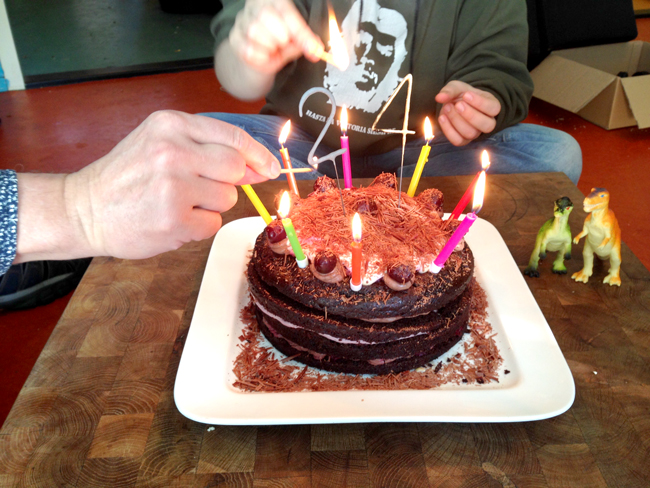 I also can’t seem to get the hang of chocolate curls, which annoys me to no end. One would not expect this cake to be the picture of health. One would be right, but it also isn’t that bad. It is the low-fat bundt from Veganomicon with some cherry puree instead of apple, and the fillings are all from Vegan Pie in the Sky, but in such a way that they are now largely sugar free and sweetened with stevia. People have commented that it tastes not necessarily healthy, but less like a brick on the stomach than the regular Schwartzwalder, so they were not sad about the healthy. A professional baker at the local market, I repeat, a professional baker complimented me on it. He especially liked the cream filling, and he tasted the prototype that had some raspberry pips in there that I thought ruined it. So it must be really good. He had not expected the answer to “what is that cream made of?” to be tofu. 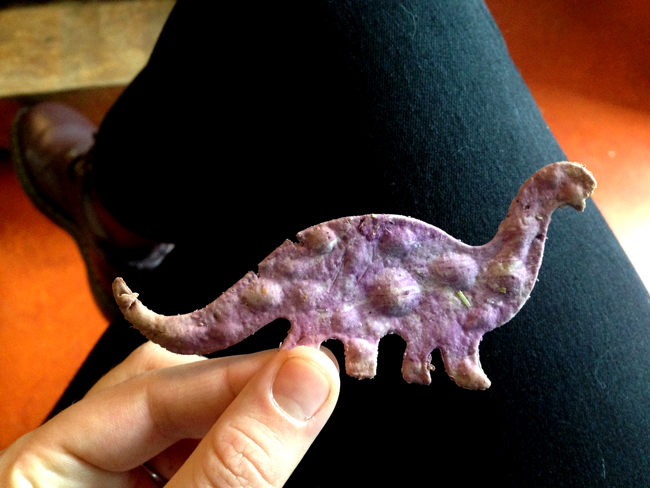 In short, all parts of the birthday cake inspired by Jamie Oliver were a smashing hit! And he has a recipe for tofu-mousse as well. I have also added a dinosaur cracker as a preview for the next post because I’m so excited about it.