This is my very first cupcake recipe. And boy is it good! Ok, maybe it isn’t mine, because I adapted it from this one on vegweb, but my adaptation is better. And the perfect size for 12 cupcakes (which take way less time to bake than a full cake does). My sister ate 6 when we weren’t looking. They’re that good, apparently. Herma from yoga wanted carrot-cake, so I set to work, and it turns out this is the best carrot cake I’ve ever had. Thank you, Herma! I am biased, though, because I’m not fond of the texture carrot cake usually is. These are also pretty heavy on the carrot, which to my mind is a plus. 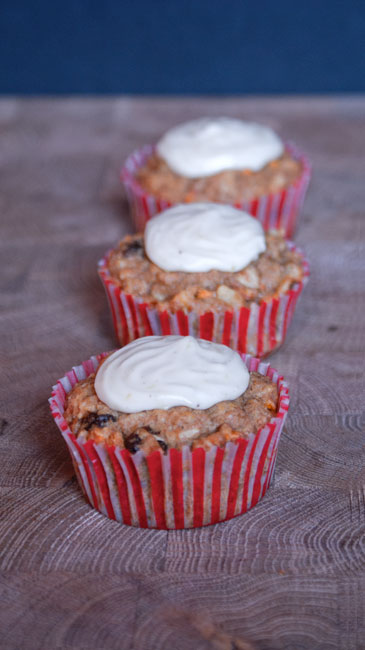 We also need to discuss the sweetness of my baking. Most people seem to like it, but it’s not usually as sweet as the standard recipe. I generally prefer sucanat, especially when a recipe calls for brown sugar. And unless your baked goods would be ruined by something that tastes recognisably of cane sugar, or by a darker colour, I find it adds a more complex flavour to most recipes, especially those with chocolate. Sucanat can be used in anything, it doesn’t affect texture in cookies and cakes, and you can kid yourself into thinking it’s a little healthier because it has trace minerals. Further to sometimes subbing sucanat, with American/British cookbooks I’ll almost invariably cut the sugar back to 3/4 or 7/8 of the original. I used to think that this didn’t affect the taste too much, but in truth it’s because I prefer things a little less sweet. Which is to say that you should never be afraid to improvise with your baking, as long as you keep an eye on your dry/wet/chemical-raising-agent-ratios.