I told you about the friend got me Daiya and I may have used it in everything. It turns out I am not a fan of the cheddar slices. But the mozzarella is a lot milder and I don’t think people really notice the difference between this and what’s on regular frozen pizzas. Anyway, it is really good so I put it on everything. I put it on a hummus-pesto-hybrid made from fresh green peas, pine nuts and mint for some fancy open-faced grilled cheese. A little bit of sriracha gave it more of a kick, which I like. 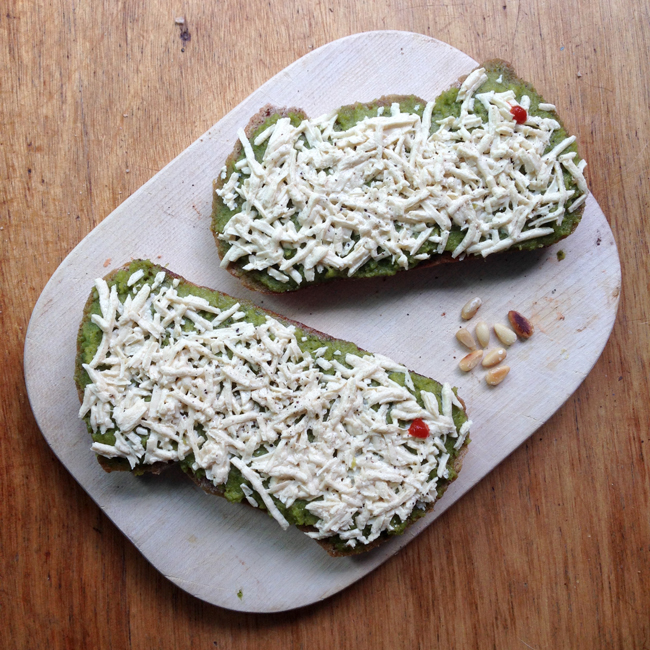 Having had a chance to try Teese, Sheese, aforementioned Cheezly, Tofutti, Violife, Wilmersburger and Daiya, and some tofu-feta-goat-cheese thing from a Berlin health food store that was so good I had three blocks of it in 5 days, I can say that some of those have their use. I recommend you completely ignore the first three. They’ve ruined otherwise perfectly cheeselessly delicious meals. Tofutti slices are doable if inferior, but their cream cheese is perfect, exactly that same fatty, little bit bland, rich weird creamy thing that is regular cream cheese, with not a hint of soybean. Violife is quite similar to what you can get in Dutch supermarkets pre-sliced in packets, and the same goes for Wilmersburger. I especially recommend the latter, also for grilled cheese. Daiya is the only one of those that melts somewhat realistically and the mozzarella is neutral enough to work with anything. 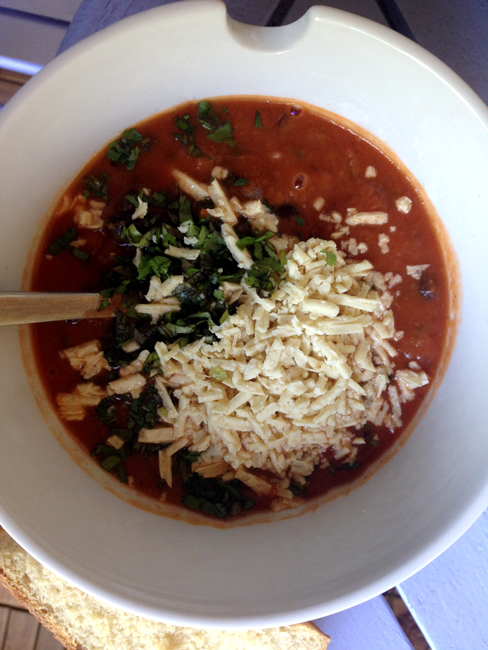 Right, my initial point of this post was that chili is really tasty with a handful of Daiya, and I made a discovery: they have smoked paprika powder at a store just a short bike ride away. I had been looking for smoked paprika for the longest time and there it suddenly was, next to the cash register. It is the best thing ever to have happened to both chili and BBQ. And sauces. And tomato soups. And salads that need a bit of heat or smoke. And tofu rubs. And baked potato fries. I’ve found the sweet variety there as well, so now I put it in almost everything. 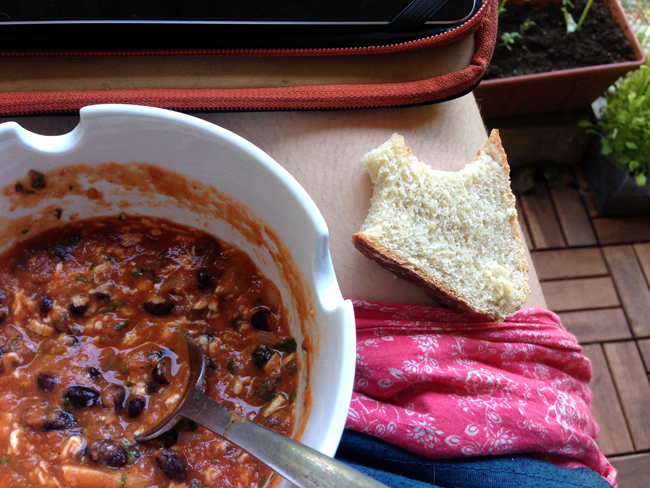 As you can see, my mum’s cooking course is really paying off. The structure of our breads has improved drastically. I am learning from a distance, and have now learned to make the best pasta I’ve had in my life so far. Penne all’ arrabbiata is something new, but it’s the kind of spicy even my family enjoys on occasion. And you can make it as spicy and with as much vegetables as you want. It takes a maximum of 20 minutes? 30 if I am very precise and finicky about it. So you should try it. I used a Jamie Oliver recipe (without dead anchovies of course), because his method of cooking is roughly similar to that of the course. You cook your pasta until just south of al dente (for me, with spaghetti that’s probably 5 minutes, 6 with a bigger pasta) and then cook it the rest of the way with a cup of cooking water added to the sauce (takes me 2 minutes usually). It makes for a really nice bite and a sauce that actually sticks to your pasta without clumping or the need for olive oil to prevent said clumping. It’s so simple and so much better that I don’t know why we didn’t start cooking pasta like this years ago! I blame the Dutch and their total lack of pasta-understanding. Or possibly a lack of Italians in my life.