…then we take the moose. We all know that thanks to the Swedish Chef. I thought about that sketch for half a year. And then we had a few weeks of vacation. 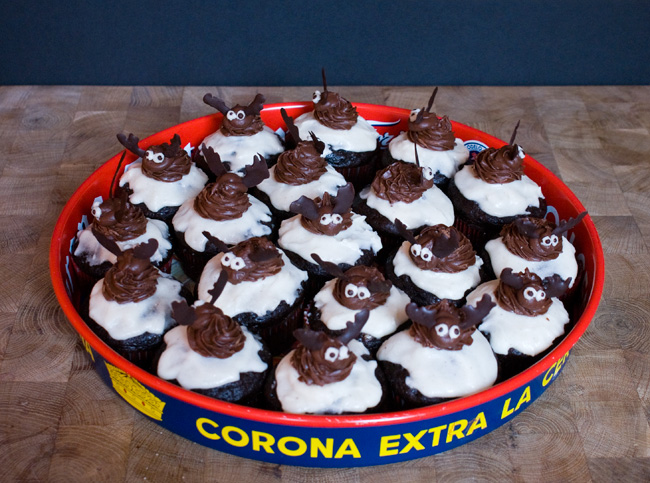 I originally made the moose for yoga teacher Beth, but it seemed easier to make a lot of them, so here they are. I set about to make two dozen cupcakes. It took roughly 9 hours, and transportation proved an even bigger problem. My sister stole a cupcake, and I had only had 19 moose, so in the end, that’s how many cupcakes we ended up with. 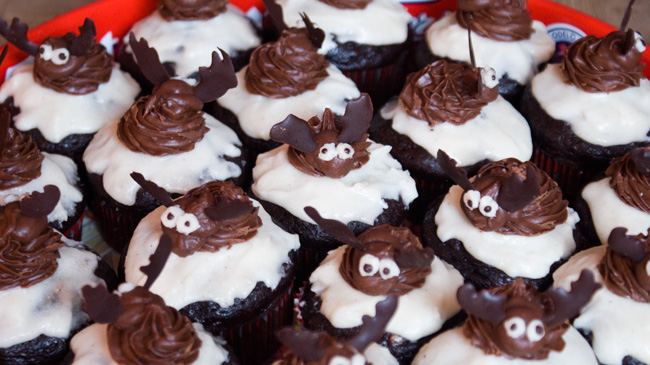 The first 3 (barely set, not even properly gift-wrapped) were for Beth, she taught us yoga for a few weeks while Marco was on holiday, and she’s the best. Then a fuckload (10 of them) traveled to Wageningen for some of our best friends, who’d organized a barbecue. I hadn’t seen the kids in 3 years, so it seemed appropriate. We ate the last ones for dessert the next day, and then our adopted fifth family-member arrived safely from Mexico so he got the very last one. 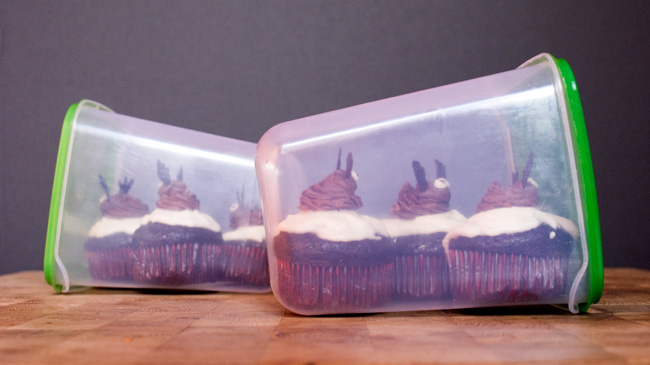 Oh yeah, and two frozen moose will travel to Marco’s refrigerator, as a welcome-back present. I sandwiched them tightly into a few containers so they wouldn’t lose their antlers. It’s very difficult to keep the antlers in, I fear Marco will be getting injured moose. I ate another injured one myself, and my sister mutilated one by biting its head of then smearing the cake all over the couch.

The cakes are your basic chocolate cupcake from Vegan Cupcakes Take Over the World. I overfilled the liners a bit to get the desired “mountain”.
The frosting for the eyes and snow is fluffy vegan buttercream, the moose chocolate fluffy buttercream, and the antlers and pupils are plain Vivani couverture melted and piped. 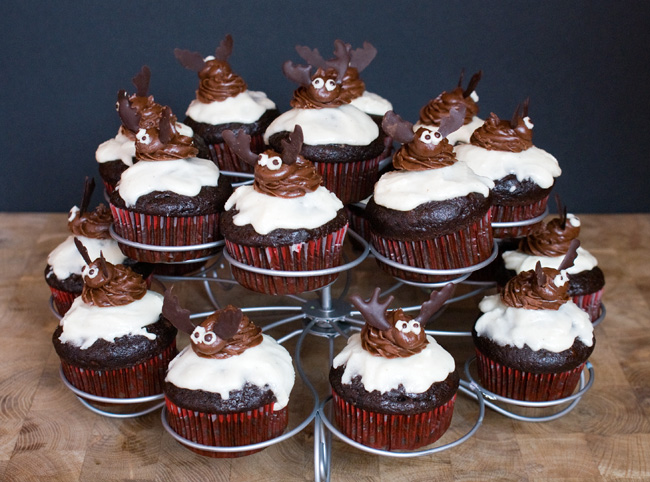 The antlers are easy. Put the melted chocolate in a bag with the corner cut off (make a tiny, tiny hole, otherwise you have a problem), draw a line and three dots along that line to create a basic antler-form on parchment paper. For the eyes: FIRST make a lot of whites, then pipe a drop of Vivani onto that. If you make those separate and have to get the drops onto the whites, well, let’s just say I wouldn’t wish it on my worst enemy. It takes a toothpick and way too much determination and care. It will mess with your mind. Don’t ask me how I know. 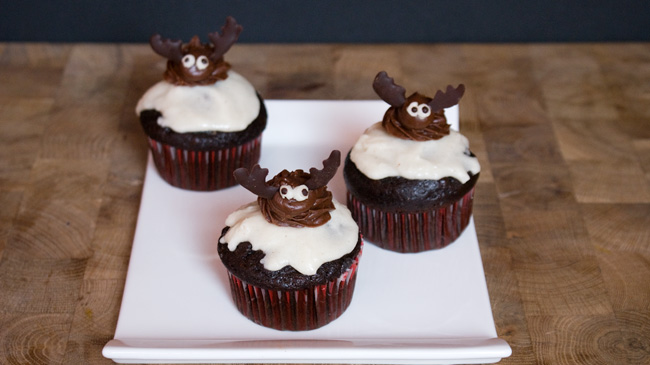 During the entire process you’re going to have to freeze or refrigerate an awful lot, because as soon as you touch anything for longer than a second, it’s going to melt or go soft. But it’s a lot more doable than you’d think given the end result.