It started out, innocently enough, with Mad Men, the second series dvd-box. It’s one of the few dvd’s I kept after the big purge. There was a recipe for tarte aux pommes à l’alsacienne. I saw it at 3 in the morning while stressing over schoolwork, thinking: “I should do this after I’ve glue-gunned this skirt, somewhere in the near future”, then proceeding to burn myself with said glue-gun.Second situation leading up to this tarte: lots of prunes, relatively good but not ripe enough to eat out of the hand. Then the old recipe came into my head, and I thought: bingo, I should do that. Google-y google-y and then there were some lovely original French recipes, and combining my limited knowledge of French (turns out it’s more than adequate to read recipes) with the need to veganize everything turned out fine. You’ll make a cashew-based cream filling with a blender. The cake will be firmer if you do so the night before, but it will work on the spot, even though it’ll sink more. 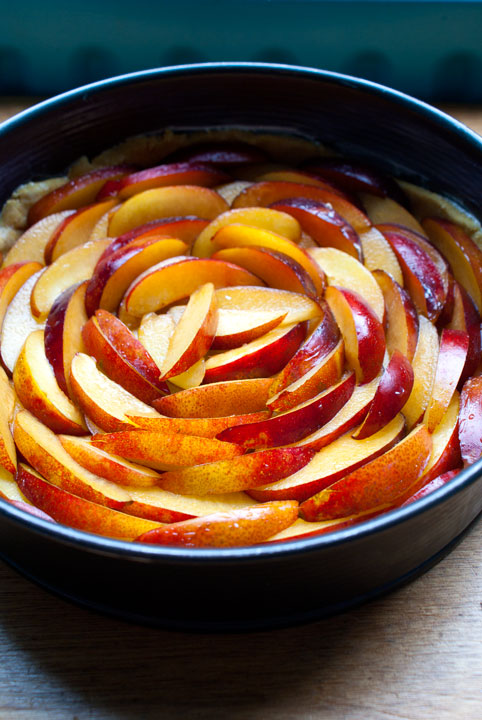 The original called for 4 apples, so I used 6 large prunes. They were in season. It will work with every fruit, just use what you think is the equivalent of 4 apples, about 3 cups? It’s somewhere in between clafoutis and a cream-pie. My dad tasted it thinking it was quiche and was (somewhat unpleasantly) surprised. We were all wondering why he was having cake in the middle of his dinner. Turns out this is also a very nice base for quiches, if you use vegetables. More on that next time. There’s a few ways of baking it. You can arrange the fruit, then pour the cream (see pictures). If you have to transport it or want to prevent it from looking really dreary the second day (say, you wan’t cake and do not have impress via dinner party) just mix it all in. Tastes the same, won’t become blotchy/stained and crackly the second day! In the first case you’ll want to spend some time making nice half-moon shapes, in the second case, just chop and mix. Which reminds me: slivered almonds wouldn’t taste half bad on top, nor would some chocolate sauce. 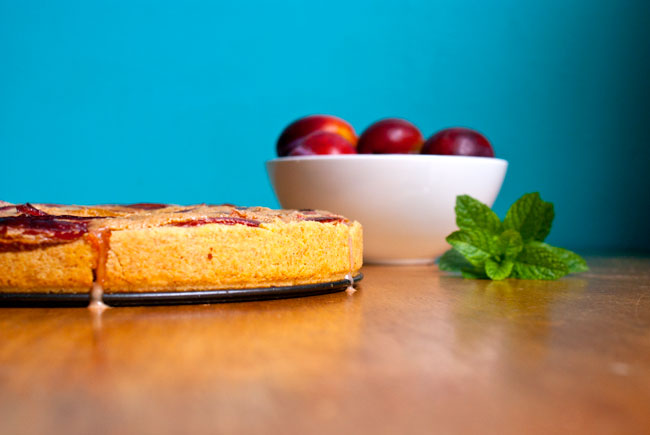 I suggest your making this tart and then renting a decent french movie, invite some friends, if one of them has a beamer/big screen tv: bribe them by making things dipped in chocolate sauce. Then, in the tradition of my lovely high school French teachers, proceed with a French-movie-night. Never have I had such fun as having pain au chocolat while watching Harry un ami qui vous veut du bien. Actually, we had some very icky dutch cookies. But one can dream, can’t they?