I have a confession to make. It is somehow related to Toby the Targ, B’Ellana Torres‘ stuffed targ. Now, I know Bobby isn’t a targ. But he is stuffed and if I were to go on an away mission for more than 3 days, I probably would take Bobby. I am not sure why I keep comparing Toby and Bobby, I think it’s because I can identify with a grown woman being attached to a plush toy. Bobby and I have been through a lot together. He was with me when I was in the incubator and has been ever since. I hate traveling because that means he stays home (don’t want to lose him on the other side of the globe, now do I?). I always thought Bobby would last until I’d started living together with somebody around the age of 30, which would mean him automatically losing his spot in the bed to Mr. Fliers (although I have since decided that mr. Fliers will just have to learn to live with Bobby). Or if there weren’t any candidates it’d just be me and Bobby forever, which was a serious upside to the whole growing old alone. 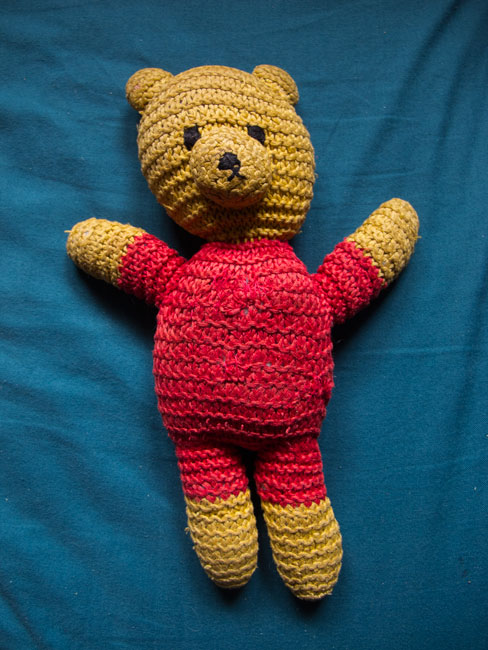 However, after 20 years of fateful friendship, his knit is coming apart. I’ve sort off fixed it with some sewing thread, but it could come apart any minute. To be honest: hugging him would be murder.The cotton is so old that it’s coming apart inside the thread, breaking in places. So as a last honor to Bobby: he disappeared for 3 horrible months when I thought he was lost forever, when I was 4, only to come out from under the wicker costume basket. When I was 7 he performed the lead in an all puppet cast of Hair (in English, he was wise for his age). That one night when I was 16, I felt so sad and lonely that people couldn’t comfort me but he could. Both moments of great joy or sadness never frightened him. And while I love my camera and computer and name them as well, attribute a personality to them etc., I’d gladly trade Oscar (who is worth, in fact, 6 months wage) for the rest of my life with Bobby. Bobby is irreplaceable.